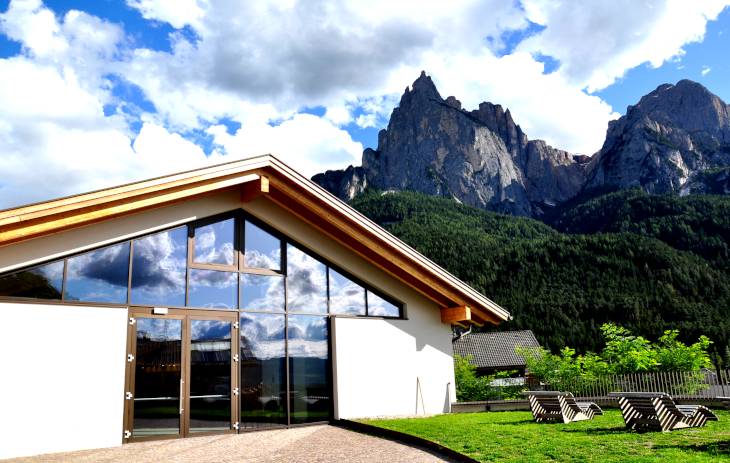 In the Nature Park Visitor Center, a lot of space is devoted to the unique geology that led to the designation of the area as a Unesco World Natural Heritage Site. Specially made geological models impressively illustrate the long journey of the Schlern/Sciliar, which began millions of years ago in eastern Africa. A stone cut in half, a so-called cipite, a large piece of coral reef broken off from an atoll, documents the formation of dolomite rock from coral reefs.

The house also focuses on the special flora and fauna of the nature park, which has always attracted numerous scientists and nature lovers. With the help of animated telescopes, visitors can look for special plants and animals on large screens. If you pass by the Nature Park Visitor Center at night, with a bit of luck you will discover some crepuscular and nocturnal creatures native to the park area on night projections.

The landscape of the Schlern-Rosengarten / Sciliar-Catinaccio Nature Park, which is perceived as "beautiful", has also become the way it is today due to the influence of the inhabitants of this area. The pictures on the picture wall of the Nature Park House underline the manifold shaping of the landscape by man. This is also expressed in the park's leitmotif "Old Cultures and New Views".  In an interactive landscape game housed in the middle of the room in a prominent tree trunk, visitors can find out for themselves how different forms of agricultural cultivation and tourism affect the landscape.

Those who want to relax in the entrance area before or after their walk through the nature park house can sit down on one of the inviting sofas or view the beauty of the area on the 360° panorama pictures.

Also housed in the center are the tourist association and the library.